While I could have made this an article about how to send free international text messages, I chose not to for the following reasons:

A well-known exception is Google Voice, which I discuss in the article on How to Make Phone Calls Online for Free. However, Google Voice is, at present, only available to users in the United States, and text messages can only be sent to numbers in the U.S. and Canada, so it’s not an international solution.

There are many country-specific websites which allow people to send free text messages within that country, and if you do some research on the country in question, you may find a good solution, but often these free services suffer from the problems as listed above – and I know this from exploring such services in Europe. If you decide to sign up with a free text messaging website in a foreign country with a prepaid SIM card from that country, I would suggest reading the fine print and making sure you understand it (especially it if it’s not your native language), as you may be signing yourself up for a paid service which will be charged against your prepaid credit without it being obvious.

If you want the lowest possible rates for sending texts to any country, my recommendation is the service provided by FishText.com. You can view a list of their rates by country, listed in both Euro and British Pounds. I’ve been using this service for the past couple years and in general have found that they have the best prices and are for the most part reliable – not perfect, but better than the alternatives, and you can view the status of your sent messages to see if they were delivered successfully or not. Once configured with your mobile number, sent messages will appear to come from that number.

Note that to get the best rates, you may be better off buying your credit in British pounds. Unfortunately, to do this, you have to sign up with a British mobile number, but after signing up you can change your number to a non-British number and continue to pay in British Pounds. If you won’t be passing through the UK anytime soon and don’t have any friends there whom can send you a SIM card, you could purchase a Mobal International SIM Card

which gets you a UK-based mobile number for life. Mobal’s rates are expensive if you actually make or receive calls or send texts (which is why it has mixed reviews), but incoming text messages are always free, regardless of where you are in the world, and the SIM card never expires – a very rare feature for a mobile phone service which doesn’t require you to pay a monthly or annual fee. If you travel abroad often I recommend getting one for emergency use only (i.e.  in case your regular phone service isn’t working) and keeping it in a very safe place.

Once you’re signed up and ready to go, you can send text messages to friends and family anywhere in the world at a minimum cost. FishText allows you to send messages directly from their website if you’re at a computer or from your mobile device with a data connection. Here are some options for sending international text messages while on the go.

A screenshot of the FishText mobile web app 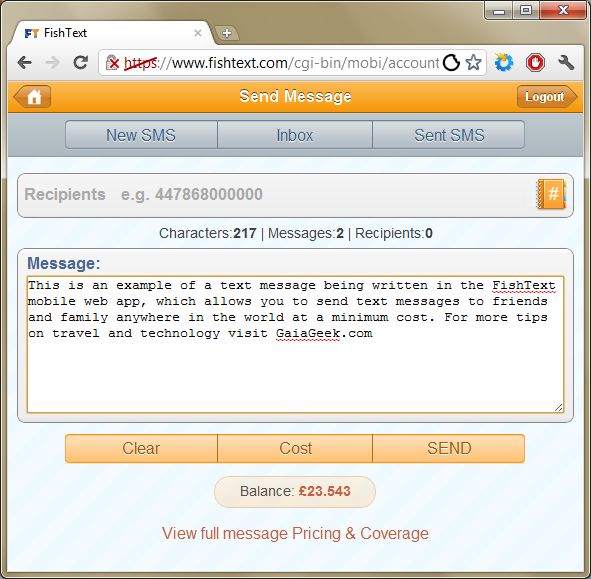 Note that any of the above will of course use data, but it’s generally a very small amount of data, usually under 1KB if you’re using one of the dedicated apps, but obviously you’ll have to pay for that data use if you’re not connected to the net via Wi-Fi.

If you know of another international SMS service with similar or better rates, feel free to leave a comment below and share the knowledge.